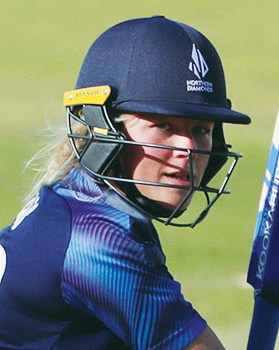 DELIGHTED Charlotte Taylor described her matchwinning spell in the Rachael Heyhoe Flint Trophy final as “the best I’ve ever bowled” after spinning Southern Vipers to victory over Northern Diamonds at Edgbaston.

The off-spinner tore through the Diamonds middle order on her way to figures of 6-34 as Vipers defended 231 to win by 38 runs and ensure they finished a memorable tournament unbeaten.

“It was a great final on a great ground, and it could have gone either way,” said the 26-year-old, who was only drafted into the Vipers squad after the competition had started but ended as its leading wicket taker with 15 at an average of 10.13.

“That’s the best I’ve ever bowled. I couldn’t have asked for anything better. I’m proving to myself week in, week out that I can play at this level.”

Diamonds had started their chase strongly despite the loss of England international Lauren Winfield-Hill, who chipped Maia Bouchier to cover on 20.

Hollie Armitage (26) and Sterre Kalis played fluently to take Diamonds to 74-1 as the 15th over began – at which point Taylor turned the game on its head.

Armitage chipped to backward point and Alex MacDonald fell hit wicket to her first delivery either side of Ami Campbell’s run out. Taylor then claimed the key wicket of Jenny Gunn and, when Bess Heath swept the spinner straight to deep mid-wicket, Diamonds were reeling on 96-6 having lost five wickets for 22 in 8.1 overs.

Kalis had watched the carnage unfold from the other end and kept Diamonds in the contest during a spirited 49-run stand with Beth Langston for the eighth wicket.

But Taylor returned and trapped Langston in front for 21 in her first over back in the attack to seal her five-fer.

There was more to come in her final over as Kalis, having dug in for a fine 55, picked out Georgia Adams at mid-on to all but seal the outcome.

Fittingly, Vipers skipper Adams – whose superb 80 earlier in the day was the bedrock of her side’s total – picked up the final wicket to complete a fine individual display of her own and start the celebrations for Charlotte Edwards’ side.

“Armitage, Winfield- Hill and Kalis got them off to a good start, but we took wickets at key times, and I’m so happy I was able to contribute,” Taylor added. “Lots of people wouldn’t have seen me play too much cricket, and I think that works to my advantage, especially with my bowling.

“So for us to win seven games out of seven with such a young side, it’s really impressive and bodes well for the future.”

Having been put in, Vipers made a fine start with the bat as Adams and Ella McCaughan shared an opening stand of 100 inside 24 overs.

Bouchier kept the momentum going after Mc- Caughan’s departure for 35, striking five boundaries in a fluent 28, and Vipers looked set for an imposing total at 150-1 after 31 overs.

The future’s orange: Southern Vipers players can’t hide their delight after becoming the inaugural Rachael Heyhoe Flint Trophy champions
PICTURES: PA Images including the key one of Adams, who fell 20 runs short of a century after a fine innings which took the tournament’s leading run-scorer’s overall tally to 500.

Emily Windsor’s 37 proved crucial at the death as wickets continued to fall regularly, the last of which came from the penultimate ball of the innings as Vipers were dismissed for 231 – a total which proved to be enough.

“I’m just so proud of this team. Everyone stood up and showed loads of character throughout the competition,” said victorious captain Adams, the daughter of former Sussex skipper Chris.

“I have been playing simple cricket, trying to hit the ball as straight as possible.

“Fifty overs is a lot longer than you think and I have been guilty in the past of not being patient enough in this format.

“I’m really pleased to have contributed the way I have.

“I have always had one eye on England. I have been close before but just never scored consistently enough. If it does happen, hopefully I can take my opportunity.”

Diamonds skipper Winfield-Hill was left to rue the “soft dismissals” which disrupted her side’s chase and said: “We didn’t bat very well. A lot of people got themselves out rather than being got out.

“But we’ll learn from that. We just need to be playing in these finals and find a way to win.

“At one stage we thought it was a 260 pitch, but in the end they probably got 20 or 30 too many with people down the order chipping in. That proved to be the difference.” 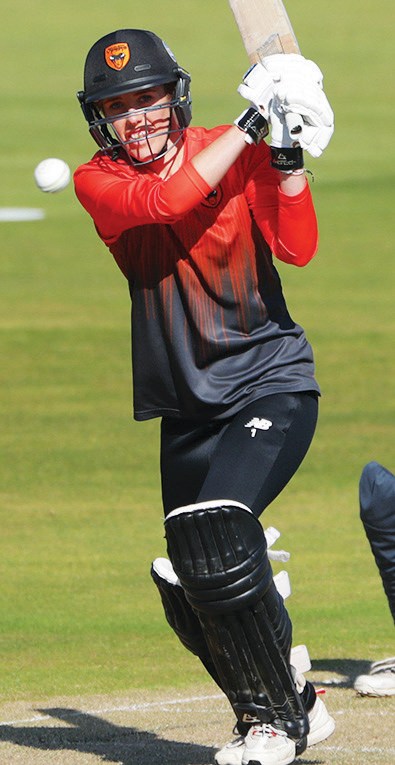