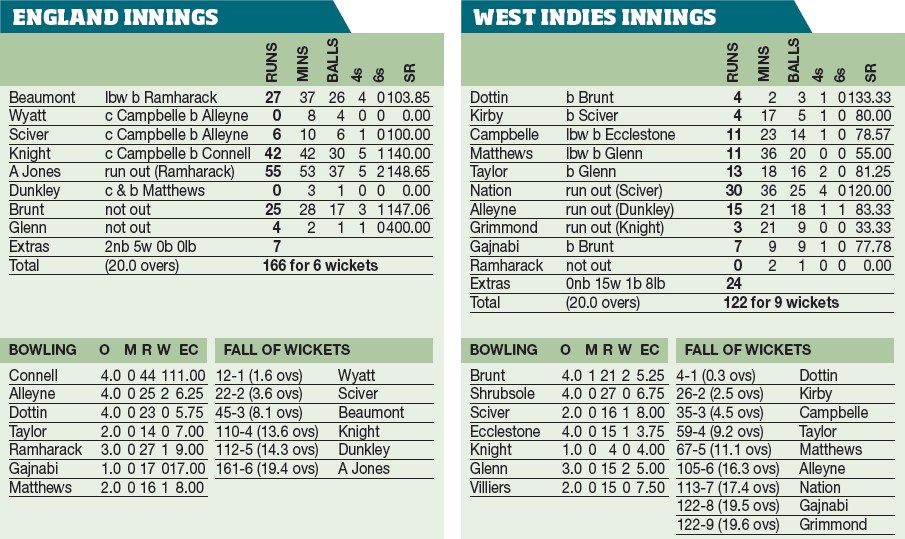 AMY JONES proved she is relishing life as England’s new number five with 55 from 37 balls as England went 4-0 up in the series.

“Batting in a different position than I have previously is a new challenge which I’m enjoying,” Jones said after being named player of the match. “It wasn’t my prefer- A SIX-MONTH lay-off amid an everchanging world couldn’t stop Australia from maintaining the status quo with a dominant T20 series win over New Zealand. In their first cricket since storming to a fifth Women’s T20 World Cup title in March, Meg Lanning’s side wrapped up the three-match series with a game to spare, though the tourists gained a consolation win in the final contest. Despite the absence of injured superstar all-rounder Ellyse Perry, the hosts made easy work of their opponents in the opening two encounters – a feat that extended their 13-match white-ball winning streak over their trans-Tasman rivals. Despite losing that record in the final game, the series win ensured the Aussies have now won ten T20 series in a row. The first encounter, won by 17 runs, saw Ashleigh Gardner (61) come to the fore. Despite the efforts of captain Lanning (24), 46-3 represented a disappointing opening eight overs and it took some fine ball-striking in a 41-ball knock from Gardner to propel Australia to 138-6. Sophie Devine (29) and Suzie Bates (33) threatened but the loss of Devine to a contentious decision put paid to their chances as Megan Schutt (4-23) shone with the ball. If the first game was close to a point, then the second was the complete opposite as Australia romped to an eight-wicket win. On a slow, used surface at Brisbane’s Allan Border Field, New Zealand chose to bat but were undone by the tricky seam of Delissa Kimmince (3-21) and spinner Georgia Wareham (3-26) as the visitors could only post 128 all out from 19.2 overs. That target never looked enough and openers Alyssa Healy (33) and Beth Mooney (24) got off to a flyer before Lanning (26 not out) and Rachael Haynes’ (40 not out) unbeaten stand of 65 sealed the series. But New Zealand fought back with a five-wicket triumph inspired by young prospect Amelia Kerr to halve the series deficit. The 19-year-old starred with ball (2-18) and bat (18no) as the White Ferns chased down 124 with three balls to spare. Kerr initially helped restrict the world champions to 123-7 from their 20 overs, Gardner top scoring with 29. And, despite stuttering to 44-3 and 98-5 in the chase, Kerr’s cameo saw New Zealand home. l Captain Meg Lanning smashed a fine unbeaten 62 to helped Australia to a seven- wicket victory in their One-Day International series opener with New Zealand yesterday morning. Maddy Green top scored with 35 as the White Ferns limped to 180 all out – Australia cruising to their target in 33.4 overs. ence at the start when it was decided. I’ve always opened, it’s where I’ve seen myself.

“But since doing it it’s definitely a new challenge and I am enjoying it. You have to adapt to the situation at five which makes it a bit interesting.”

Jones was dropped twice on her way to her fifty but took advantage. “That [second chance] should have gone for four so I was annoyed that I picked her out,” she said of her second life. “But getting any chance is very helpful and I was happy to cash in after that.”

“It’s been an annoying one because I feel like I’m keeping as well as I ever have, probably better,” Jones said. “I can feel my game going up a level, felt like I’ve been really tidy, quite sharp. It’s just those skiers, I’m having a nightmare with them.”

Jones has struggled with high catches in the series.

“It’s a real pain. They’re always tough chances but I need to be taking them. I need a more stable base, get there early and try and trust my hands from there.

“I’ve had one chance before this and that was in West Indies and I dropped that so my record’s not great. The depth perception out of a black sky is always very difficult. It always feels like it’s coming right at you and then it seems to be a metre in front of me. I think it’s just about getting there early, try and make the ground early, being stable and then sort of reacting from there, which is something I’ve not mastered.”

Another disciplined bowling display from England curtailed West Indies to 122- 9 as the one-sided series continued. 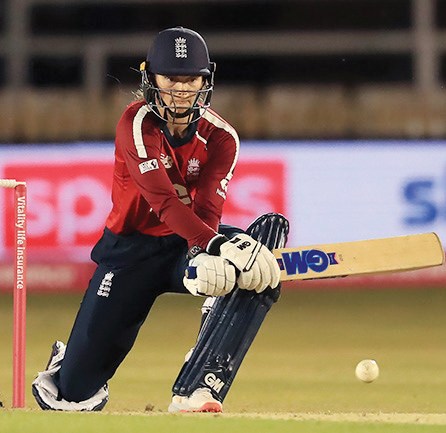