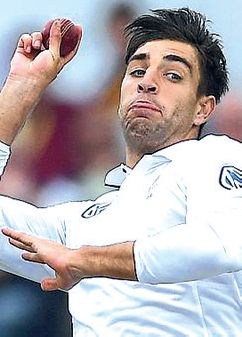 YORKSHIRE seamer Duanne Olivier will use a spell of domestic cricket back in South Africa to prepare fully for the next county season in 2021.

The 28-year-old, in his final year as a designated Kolpak player before assuming overseas status, was forced to miss the Bob Willis Trophy opener against Durham due to lockdown in his homeland but did return for the final four games of the campaign, taking 10 wickets at 36.40.

Olivier abandoned a promising Test career to move to Headingley in 2019 but is now preparing to resume his career in South Africa with the aim of being 100 per cent for the 2021 county campaign.

“To be honest, I learned a lot from last year,” Olivier said.

“Although lockdown in South Africa was quite strict, and it would have been ideal if I’d had a bit more preparation, I felt more relaxed this year and just tried to keep things as simple as possible.

“It’s getting there – it’s a work in progress – and I’m now going to try and play domestic cricket back home as preparation for the next English season.”

LEGEND MS Dhoni has earned himself another place in the history books after becoming the IPL’s record appearance maker.

The Chennai Super Kings captain broke Suresh Raina’s record of 192 matches when leading his side out against Sunrisers Hyderabad on Friday.

Raina is sitting out this year’s tournament for personal reasons.