ALI Khan is earning his stars and stripes in the Indian Premier League, with the first American to play in the tournament breaking down barriers in every sense.

Not only is Khan one of very few players born in Pakistan to play in the competition, he’s also providing inspiration to his naturalised country of America where cricket is on the up but still playing catch-up with the rest of the world.

A late replacement for Harry Gurney at the Kolkata Knight Riders, the 29-year-old had won the Caribbean Premier League with the Trinbago Knight Riders just days before jetting off for the experience of a lifetime with the IPL giants. He had taken 2-25 in the final to continue a sensational run of CPL form, and KKR had clearly taken note, whistling him up just days before the start of the tournament.

It’s just the latest in a series of overseas assignments for Khan, who has previous experience in the Pakistan Super League for the Karachi Kings, as well as shining in the Bangladesh Premier League, the Caribbean Premier League and Canada’s Global T20.

Not bad going for a man who arrived in Ohio at the age of 18 and wasn’t spotted until an open trial in Indianapolis in 2015.

Liam Plunkett played alongside Khan in the PSL and has been impressed with what he has seen of the Punjab-born 29-yearold.

“He’s a very good cricketer,” says Plunkett, who could one-day line-up alongside Khan for the USA. “He’s pretty quick, hits the bat hard and is also a decent batsman.”

Clearly, the IPL call is the biggest of his career and a huge shot in the arm for USA cricket at the time when the country is attempting to forge a reputation on the international stage.

For Khan himself, it’s the realisation of a dream that looked unlikely when he touched down in the Midwest in 2009. It meant even more after he was overlooked in the original 2020 auction in December.

At the time he thought that his chance had gone, reasoning that an appearance on the roster of the annual spending frenzy was as close as he would get to playing in the most lucrative tournament in world cricket.

Now, after Gurney’s withdrawal, he’s living the dream alongside the likes of Pat Cummins, Lockie Ferguson, Andre Russell and England pair, Eoin Morgan and Tom Banton under the watchful gaze of coach Brendon McCullum who welcomed him into the Knight Riders team last month.

Ali admits that he was reduced to tears in the dressing room as McCullum introduced him to his new team-mates. “I won’t let you down, Baz,” he said to his coach after the tears had subsided.

Khan is still waiting for his first opportunity to run out for his new franchise but, if and when the call comes, he’ll be ready. And if his performance in the 2020 CPL final is anything to go by, he’ll be as good as his word.

Khan topped 145kph on the speed gun in that match for Trinbago and his ability to bowl yorkers almost at will are as useful a weapon as a T20 bowler can have in their armoury. And to borrow, and alter, some words from Frank Sinatra, if you can make it in the IPL, you can make it anywhere.

Who knows, the next step on Khan’s incredible journey might be the Hundred next summer.

Regardless, one thing is certain, the Ohio slinger is going places. 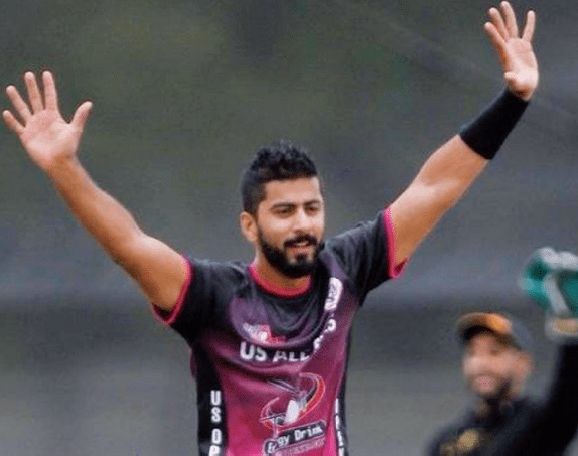 Talent: Ali Khan is ready to make his IPL bow