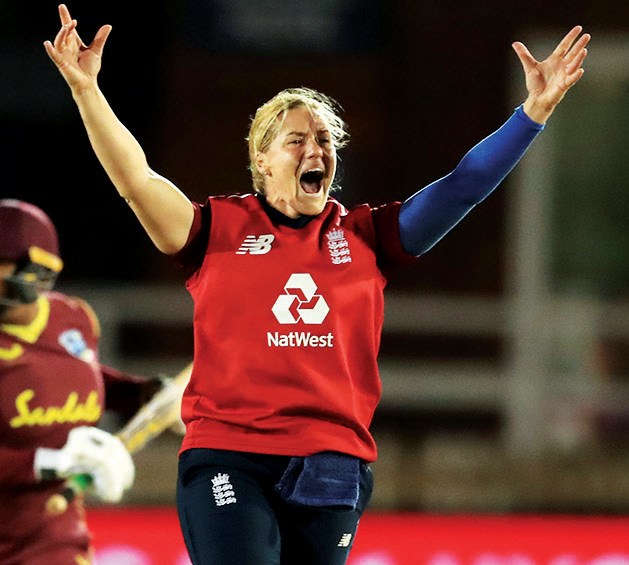 A TOP score of nine proved to be enough for England to put the gloss on the series with a fifth victory at Derby on Wednesday.

Heavy rain in the east midlands delayed the start but the home side put the tourists in and limited them to 41 in their five overs.

Requiring 42 for victory, England slumped to 5-2 inside the first over, but claimed victory in a hectic final over that saw two run- -outs and then a rash of noballs from Shakera Selman that sealed the result with three balls left.

Earlier Deandra Dottin whipped the third ball of the match through long-on for four before hammering Freya Davies’ next ball over deep mid-wicket for her 100th six in T20Is.

Davies then dismissed Hayley Matthews for nought, caught at mid-on to complete a poor series for Matthews, who only reached double figures twice in five innings.

Katherine Brunt was the star bowler for England with an economical 1-14 from two overs including the dismissal of the dangerous Dottin, who chipped to Sarah Glenn at third man to be out for 11.

Sophie Ecclestone, as she had throughout the series, produced more effective spin to remove Chedean Nation for nought in her two overs for 16.

West Indies captain Sta fanie Taylor remained unbeaten on 15 from 10 balls while Natasha McLean was 14 not out.

England’s chase got off to a tough start when Heather Knight lifted Shamilia Connell’s second delivery to Taylor for four and Amy Jones miscued to McLean at midon without scoring two balls later. The next over, bowled by Selman, went for 12 but included the wicket of Tammy Beaumont to a top-edge that found Nation at cover for nine.

Nat Sciver and Katharine Brunt then fell in successive deliveries, the former to a run-out by Shamilia Connell and Brunt to a fantastic catch by Taylor, diving to her left and pulling the ball in at cover. England were left needing 15 off the last two overs.

The junior duo of Sarah Glenn and Sophia Dunkley kept the home side on course with a number of intelligent ones and twos, leaving seven needed from six balls. Glenn and then Fran Wilson were then run out in successive deliveries, trying to come back for a second run.

That left England requiring three from the final three deliveries. But Selman’s overstep no-ball then meant England were 41-7 facing a free hit and then a high wide no-ball handed a fifth win to the hosts with three deliveries left unbowled. Connell was player of the match for her 3-14. 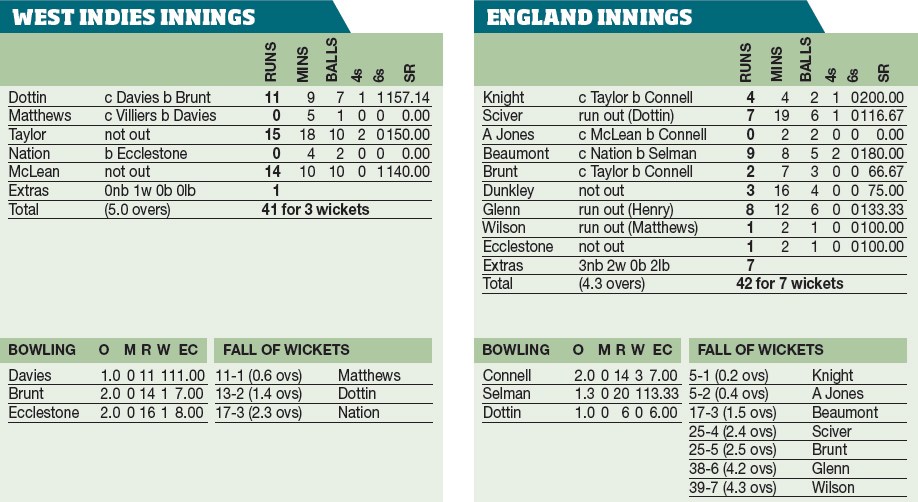