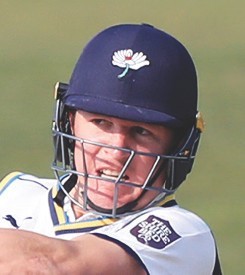 YORKSHIRE have confirmed that it’s not yet known when former England batsman Gary Ballance, 30, who’s recovering from anxiety, stress and a viral illness, will be fit again to resume playing first class and white-ball cricket, writes GUY WILLIAMS.

Ballance, Yorkshire’s leading run scorer in the last three years in the Championship during which he hit 11 centuries, hasn’t played in any of the county’s games in the Bob Willis Trophy since managing some heightened feelings of illness following a long period of isolation due to lockdown.

The ex-Yorkshire captain has been tested twice for Covid-19, and while the tests have proved negative, Ballance, who has played in 23 Tests for England, has still to make a full recovery.

Martyn Moxon, Yorkshire’s director of cricket, told TCP: “Gary became ill in late April and early May and feels very frustrated, and it’s frustrating for us because he’s such a top player.

“Since the early part of July, Gary’s been coming in regularly for training and still does, but gets very tired during and after batting and fielding practice.

“His levels of energy are nowhere near what are needed for cricket. Gary’s not match fit and no one knows when he’ll be ready to play again.”

A club statement, released yesterday, read: “Gary’s health and well-being remains our priority and the club and medical staff will continue to work closely with Gary to support his return to playing as soon as possible.

“The club requests that Gary’s privacy in this matter is respected to allow him to focus on his return to cricket.”