By Chris Stocks at Lord’s 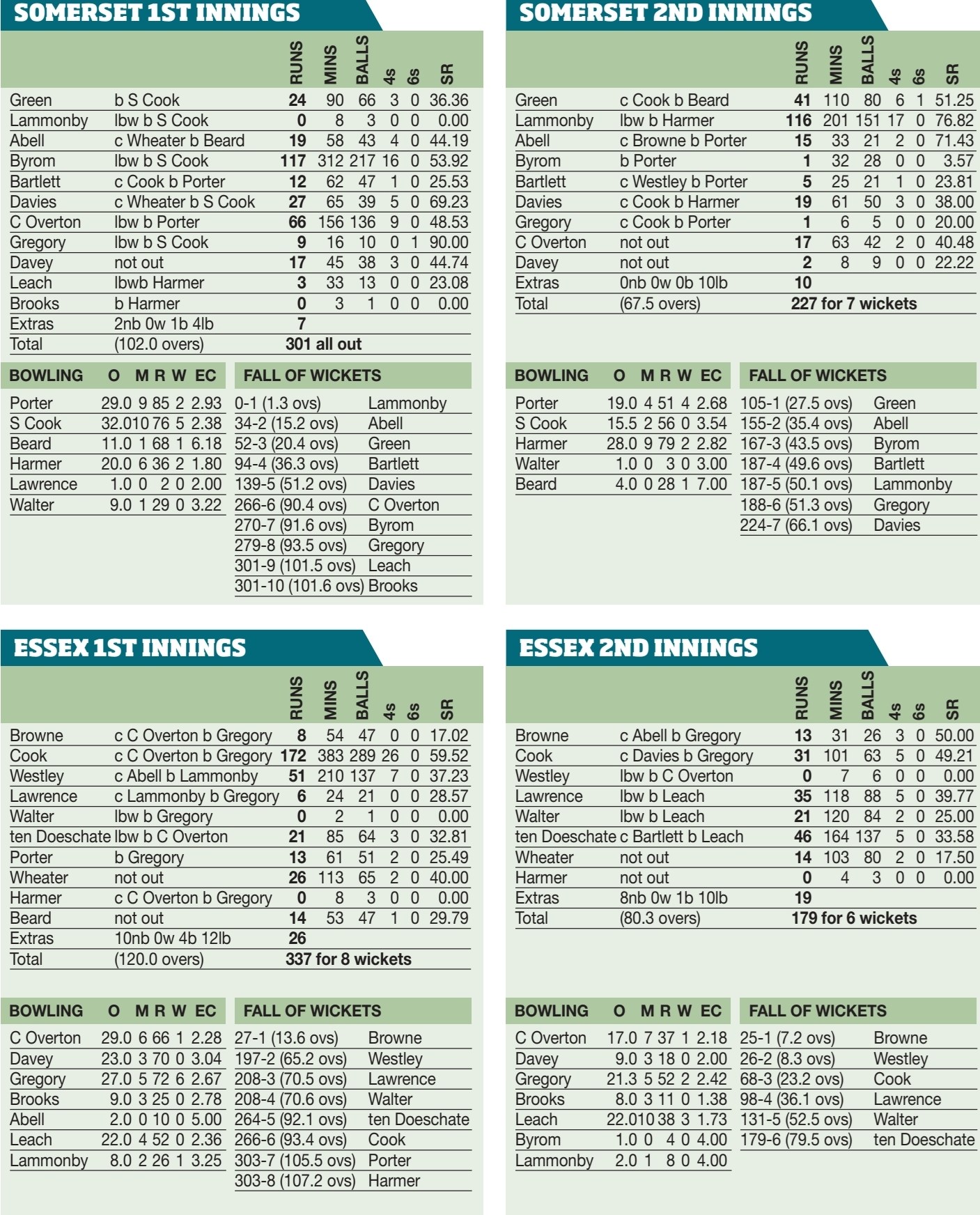 THIS was a very different summer and a different competition but in the end, we got the same result – Essex crowned champions after denying Somerset at the last.

The Bob Willis Trophy may prove to be a one-off event but Essex’s knack of picking up silverware is becoming a habit.

Just like last summer, when they battled with the bat for a draw at Taunton right down to the final ball of the season to secure their second County Championship in three years, Essex again showed the mentality of champions to hold firm against Somerset’s bowlers and secure the result that gave them the title.

Thanks to their superior first-innings total, Tom Westley’s team were afforded the luxury of not having to go for their target of 237 on the final day at Lord’s. Given a minimum of 80 overs to win the match outright, they were looking good to chase down the runs until they lost Alastair Cook early in the afternoon session to what appeared a questionable caught behind decision.

Yet ultimately this was a mere footnote after a 48- run sixth-wicket stand between Ryan ten Doeschate and Adam Wheater across 27 overs drained the belief from Somerset’s players, even if the former’s late dismissal by England spinner Jack Leach threatened one final plot twist.

Ultimately, it was Cook’s first-innings 172 that proved the difference in this contest. England’s all-time leading runscorer has been the standout performer in this competition, with 563 runs at an average of 56.30.

Yet this was a true team effort from a group of players who have now not lost a first-class match in 18 months – a run stretching back to April 2019 when they were beaten by Hampshire at the Ageas Bowl in the first game of last season.

For Westley, in his first year as captain, this Lord’s triumph was a proud moment that he ranked as highly as winning last summer’s County Championship.

“This tournament may never happen again, so to win it is amazing,” he said. “It’s right up there with winning the County Championship last year.”

For Somerset, this was another heart-breaking moment after finishing runners- up in three of the previous four summers. They are still to win a first-class title.

There were highlights for them over these five days at Lord’s, notably the second- innings century from Tom Lammonby, the 20-yearold’s third in just six games.

Yet the overwhelming feeling for Somerset captain Tom Abell was disappointment. “We were second to Essex last year and we were desperate not to be again,” he said. “Coming so close a number of times, we feel it is within touching distance. This adds fuel to the fire. But the fire is already burning pretty deep within everyone.”

Abell also hopes this summer is a one-off and the conference system is not adopted for next year’s County Championship.

“I feel we have the best first-class competition in the world,” he said. “Although I feel a Lord’s showpiece was a very special event and a privilege to be involved in.

“I guess I’m in support of promotion and relegation. I favour the County Championship.”