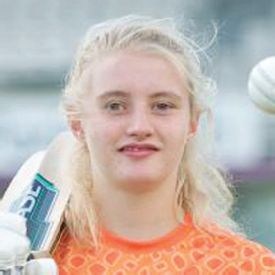 FROM watching her dad on the sidelines to winning a final at Edgbaston, Charlie Dean has come a long way in a short space of time driven by the determination to prove people wrong.

At just 19, Dean, daughter of former Staffordshire batsman Steve, already has a professional title to her name having served as a key pillar in Southern Vipers’ Rachael Heyhoe Flint Trophy triumph.

And her tenacious spirit has been on show during the Vipers’ dominant campaign – a trait established over a decade of blazing a mostly lone trail among boy-dominated sides at her club Havant and Portsmouth Grammar School.

“The initial reaction has always been ‘oh my God, why is there a girl playing for this team?’,” Dean said.

“Then there was the slow realisation that I was just as good as the boys, if not better. It’s always been great to exceed expectations.

“There’s always been that ‘oh gosh here we go, don’t get out to this one’ and that has given it an extra competitive edge which I’ve enjoyed – proving people wrong.

“As I’ve progressed, that competitiveness is definitely something which I’ve carried forward, really wanting to make a difference and prove why I’m there.”

Since first joining Havant aged nine, Dean has impressed with her varied skills, something she showed to great effect when taking a five-wicket haul in her maiden match for her school’s first team.

But the teenager, who was born in Burton upon Trent and moved to Portsmouth aged five, believes of greater significance to her development than any single success is the inspiration provided by watching her hero Charlotte Edwards growing up.

This showed her that cricket could be her game and, now, the connection has come full circle with Edwards the coach of the Vipers and Dean gaining rare access to a hero.

She added: “I have big memories of going to a couple of England games and watching Charlotte Edwards and Sarah Taylor and thinking ‘wow, women can do this too’.

“I was the only girl playing cricket that I knew for a long period of time. They had a big influence on me believing that it was actually something that I could go and do.

“It was all a bit surreal [meeting Edwards and playing alongside her for the Southern Vipers] and she’s obviously our coach so it’s really exciting.

“It’s really amazing; she does just have the biggest cricketing brain. She’s so supportive and she says the right things.”

Having represented Hampshire since she was ten and forced her way into the Vipers’ Kia Super League squad three years ago, Dean had already become a huge prospect prior to 2020.

But she admits this year’s success was needed, as much for her confidence as anything else, with nine wickets and 180 runs in Vipers’ tournament win cementing her status as an all-round threat.

“I was flying under the radar [before this year],” Dean added. “It’s definitely been a breakthrough year for me, in terms of being a consistent performer.

“It’s not something that I’m used to and it’s been really exciting for me to feel like a key player in this team.

“Form is just confidence, it’s great to be in this side. It’s been a good end to the season to gain silverware.”