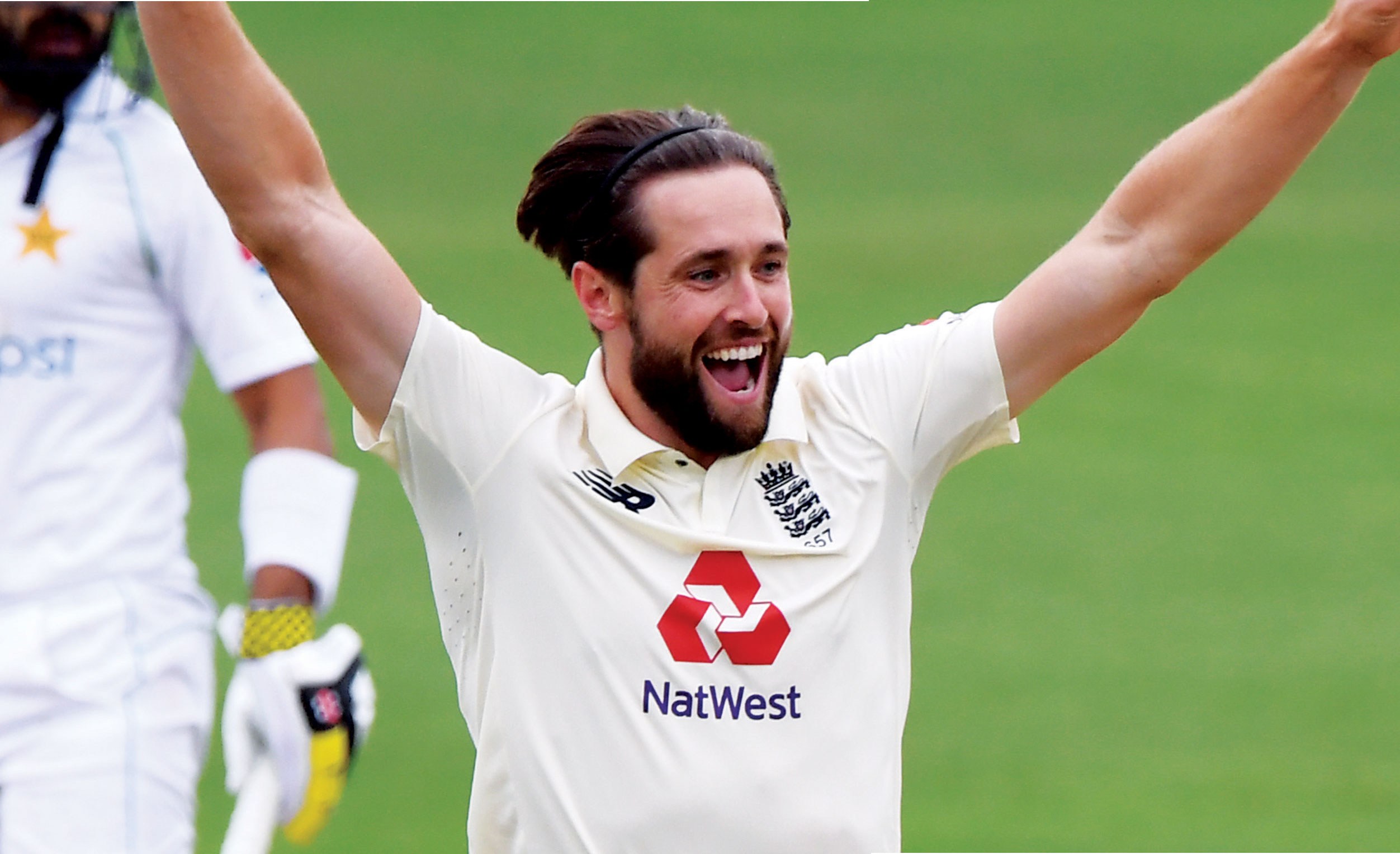 CHRIS Woakes is usually happy to eschew personal accolades and fly under the radar. Yet there is no denying that this summer he fully deserved to be named the PCA’s Player of the Year.

Woakes is speaking to The Cricket Paper hours after picking up his wife, Amy, and new-born daughter, Evie Louise, from hospital. It is the perfect end to a summer where the 31-year-old has been England’s standout performer.

The highlight was his unbeaten 84 that helped Joe Root’s team chase down 277 in a dramatic First Test against Pakistan at Old Trafford in early August.

Overall, Woakes took 17 wickets in five Tests before producing some brilliant all-round displays in the one-day series against Australia, averaging 44.50 with the bat and 22.83 with the ball. No wonder he was chosen to succeed 2019 winner Ben Stokes for this year’s award.

“It’s been a really nice summer,” says Woakes. “At one point it didn’t look as if we’d play any cricket, so for it to have gone so well for us as a team on the field for England is great. Personally, I’ve been delighted with how it’s gone.

“The fact that this award is chosen by your fellow professionals is really nice recognition. I don’t always get the limelight, which I’m perfectly happy with. But with such a strong England squad, to have performed the way I did across the Test stuff and then followed it up with a few good performances across the ODIs has maybe nudged it my way.

“What makes it so pleasing this summer is the fact I’ve performed well under tricky circumstances. The most important thing for me is that I’m contributing to England wins. So the fact I played a decent innings at Old Trafford to win that Test up there stands out as one of the highlights of the summer. Maybe that swayed the vote.”

Woakes is hoping that like teammates Stuart Broad and James Anderson, he will only get better with age. “My career, at the minute, I feel is going in the right direction,” he says. “I feel I’m getting better which is a good place to be as a 31-year-old. People start looking at your age and I’ve only got the two goats ahead of me to look up to, really. Broady and Jimmy have got better since turning 30. I certainly feel like I’m getting better as a cricketer so I’ll continue to operate in the way I do.”

The decision to sit out this year’s Indian Premier League was partly down to Woakes wanting to concentrate on his England career. Although the tournament, originally due to start in April before the pandemic struck, was rescheduled for the end of the summer, his call to ask Delhi Capitals to miss this year’s IPL has worked out well given the new arrival this week.

“It feels like it’s been the right decision,” says Woakes. “I felt like I needed a bit of a breather. I probably would have had to miss it anyway with the baby arriving. I’d have been going to the IPL feeling a bit drained and needing a break. Not necessarily because we have played loads of cricket – though we played enough – but more the way the year has gone.

“Everything that has happened with the pandemic has taken its toll on everyone and you need to take stock at times.

“Family life, at the minute, is obviously really important to me so I’m really pleased, in a way, that I did pull out. Obviously, you don’t want to burn bridges but what I will say is Delhi were really good. I spoke to the owner there on a number of occasions and he was fantastic in the way he dealt with it.”

Woakes is still not sure when he will next play cricket, yet with winter tours of South Africa, Sri Lanka and India in the pipeline he is preparing himself to be ready for whenever England call.

“The guys at home like myself are ticking over really trying to make sure we don’t get too fat and keep relatively fit,” he says. “There’ll be a lot of nappy changing and dad duties I’m sure over the next few weeks and then I’ll get back into a bit of cricket.

“I’ll probably start to pick up training mid-October, late October and just be prepared for anything.

“We have no official schedules so in that case we just need to be ready just in case something does happen. We will have fitness tests at Loughborough where I’m sure there’ll be a couple of days spent up there. That’s probably our next team get-together I think so I’ll just prepare for that and enjoy some time at home.”